Psalms 12:6-7 "The words of the LORD are pure words: as silver tried in a furnace of earth, purified seven times. Thou shalt keep them, O LORD, thou shalt preserve them from this generation for ever. 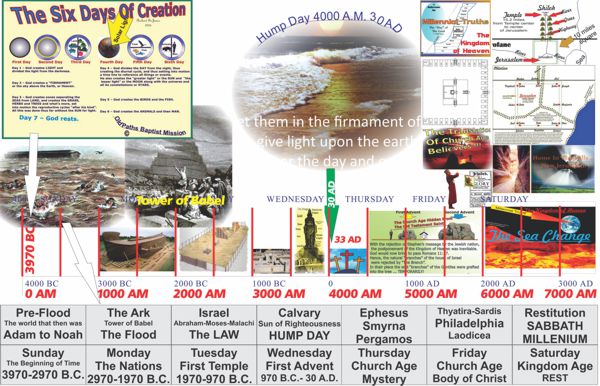 These were to be the latter years of our nation's conflict in Vietnam.

The state of a person, a place, or a thing changes over the range of time. There is a saying out there that goes something like this: “Time will tell,” or “Time will tell what will happen.”

Briefly, time will tell the matter. With time the fruit will come and will show itself, whether it be good or bad.

5. Timing is By the Number Seven

“For a just man falleth seven times, and riseth up again: but the wicked shall fall into mischief.” [Proverbs 24:16]

We see a divinely set pattern here, even supernatural, with the number seven. The “just man” has seven times more the perseverance of “the wicked” … a factor of seven to one advantage.

7. Hump Day - The Fullness of Time

In the fourth millenium, HUMP day is when “the sun of righteousness” publicly appeared [4000 AM] [30 AD].

This “Kingdom of Heaven” is “the latter days” which are a subset of “the last time”.

The pattern formed is this: God will turn again to Israel after the translation of the body of Christ occurs [which event is described in both First Corinthians chapter fifteen and in First Thessalonians chapter four, which see].