The Hedge of Thorns Series

The Hedge of Thorns Series 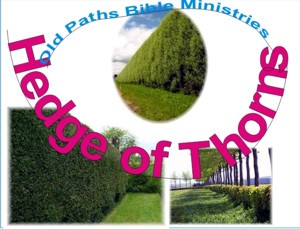 The messenger is preaching God’s word to you and me.

This is the premise of this message.

God has preserved the inspiration of His words that He spoke in times past … in the universal language of the end times … in the Authorized Version of the Bible [A.V. 1611] which is commonly known as the King James Bible.

This is where I will begin.

There is a danger when men “join house to house” in a global village.

The reason why is because of this following basic truth.

Sin within the heart of man fans the flames ever hotter and hotter when the inhabitants of this earth come together.

It is not healthy for people when the people live too close together. It was Thomas Jefferson, one of our founding fathers, that gave us this observation over two hundred years ago. Quote: “When we get piled upon one another in large cities, as in Europe, we shall become as corrupt as Europe.”

Now, Thomas Jefferson believed the Bible as many of our forefathers did. They got their “wisdom” from the word of God. “The fear of the Lord is the beginning of wisdom: and the knowledge of the holy is understanding.” [Proverbs 9:10] This is where we need to go … in order to receive WISDOM.

Now, where in the Bible is this truth located … showing the danger in joining “house to house”? It is located in Isaiah chapter five, in verse eight. This is where the Spirit of God gives us this warning concerning the cities and the suburban communities world-over: “Woe unto them that join house to house, that lay field to field, till there be no place, that they may be placed alone in the midst of the earth!” [Isaiah 5:8]

This BOOK of bounds and of limits … in the English language … is the Authorized Version of 1611. This BOOK is commonly known as the King James Bible.

Now, here are some basic truths concerning these bounds and limits:  Read more?

Now, according the BOOK, we are to walk in the “paths” that are framed or hemmed in by those bounds and by those the limits, which are established by the GOD of this BOOK.

More than all of this, God’s word reveals that there are two different paths that men may take in life.

“Peace be within thy walls, and prosperity within thy palaces.” [Psalm 122:7]
Bordering “the old paths” are the walls.

There are walls in life. Walls are erected for the protection of those who live therein. “Nevertheless the people be strong that dwell in the land, and the cities are walled, and very great: and moreover we saw the children of Anak there.” [Numbers 13:28]   Read more?

The word “hedge” is found nine times in the Bible. Every time the word “hedge” shows up in the BOOK we can see it is God behind the placement of the “hedge”. It is God that makes the hedges.

Anyone who destroys a “hedge”is going to get into trouble. “He that diggeth a pit shall fall into it; and whoso breaketh an hedge, a serpent shall bite him.” [Ecclesiastes 10:8] It is a bad thing to do … to destroy a “hedge”. A “hedge” is meant by God to be a protection. It is meant for a defense for a man.   Read more?

“The way of the slothful man is as an hedge of thorns: but the way of the righteous is made plain.” [Proverbs 15:19]

There are times when the only way to keep a person out of trouble and from being ruined, or from being destroyed, is to hem that person in with a hedge of thorns. God knows this. We need to learn this.

My friend, a wall of thorns separating you and me from ruin and destruction … is a true friend. A “hedge of thorns” is a true blessing.

This takes us straight to Hosea our Bible for this strange command. Hosea, the prophet of God, was commanded by the Lord to “take unto” himself “a wife of whoredoms” in the very first chapter in verse two.    Read more?