The DEPARTURE from THE IDEAL is because of the entrance of sin into the world through the first man ... Adam.

The Ruin Of Divorce 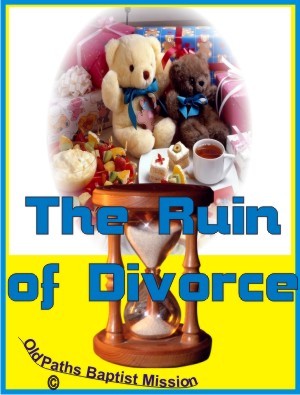 The ideal Biblical pattern for marriage is given in Genesis chapters 1 & 2. One Man - One Woman For Life ... One Family ... Both Parents ... Bringing Up The Children Together!

The DEPARTURE from THE IDEAL is because of the entrance of sin into the world through the first man ... Adam. Since the turn of this century ... we are generation by generation, getting further ... and further ... from our biblical foundations.

WHY? (I believe it is obvious.) It is because of our national sins ... of turning from the God of our fathers ... and of throwing THE LORD OUR GOD ... out of our homes, out of our schools, and out of our government.

We have removed THE OLD LANDMARKS!

We have gotten rid of THE BIBLE! We, as a nation, will not allow THE TEN COMMANDMENTS to be posted in the public schools. We will no longer teach ABSOLUTES! We will no longer have THE GOD of THE BIBLE OVER us. We are plain and simple ... REBELS! There is no question about that. It is no wonder that our marriages are no longer regarded with sanctity, or as "till death do we part."

Our DIVORCE FOR ANY REASON mentality (which is one of our wicked national sins), is destroying the family, and scarring, and crippling our children. "Woe unto the world because of offences! for it must needs be that offences come; but woe to that man by whom the offence cometh!"

"But whoso shall offend one of these little ones which believe in me, it were better for him that a millstone were hanged about his neck, and that he were drowned in the depth of the sea."

This verse from God's BOOK pronounces judgment ... to the guilty parents, or parent, WHO OFFEND: by promoting the destruction of their own marriage, and thereby, ... DEPRIVING the children of enjoying the basic biblical unit ... the family.

The family ... is where both of the natural parents raise up the children to The LORD. If one of the natural parents is missing, because of Divorce, then an offence has occurred! Woe to that parent, or parents, who have done so! It would be better for them to have a millstone hanged about their neck, and to be drowned in the depth of the sea, than to offend innocent little children by hindering them from coming to Jesus Christ.

That is how God sees it concerning the offences committed against our children. Divorce impairs the ability of the children to come to Him for their salvation. "Take heed that ye despise not one of these little ones; for I say unto you, That in heaven their angels do always behold the face of my Father which is in heaven. For the Son of man is come to save that which was lost."


Next: The Single Parent Curse