Now, we have in this country a SORRY condition, or plague, as a result of all these divorces. The plague is called: the single parent family. 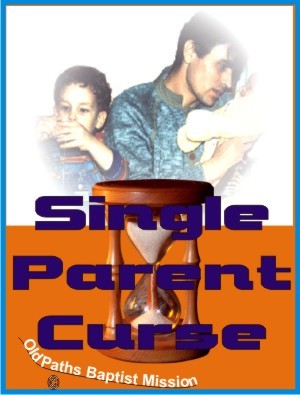 Now, we have in this country a SORRY condition, or plague, as a result of all these divorces. The plague is called: the single parent family. This is where one parent ... alone ... tries to raise children without the other parent.

This most often results in failure ... because the children need both a father and a mother ... in order to enjoy emotional and spiritual growth ... so vital and necessary to reach to adulthood.

The highway ... to successfully raising children to fear and know The LORD ... is fraught with the many dangers of living in this sin-cursed world.

Trying to go it alone with this great responsibility is to face almost certain disaster.

The Absence Of The Father results in:

· The heritage of the Father not being transmitted to the next generation.

· The nurture of a father being withheld, causing malformed children.

The Absence Of the Mother results in:

· The heritage of a Mother not being given to her children.

· The loss of the second line of defense in the home ... when the father goes off to work.

· The hardening of the hearts in the children.

· The loss of gentleness and tenderness sensed by the children.

Raising children in the single parent ordeal ... is like the ox cart trying to head down the road with one missing wheel!

Next: The Great Stepper