All About The Rear Guard Preachers - Lorenzo Dow 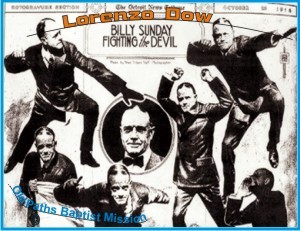 Born in Coventry, Connecticut, he felt the call to preach at the age of 18. Dow was an eccentric character in look and chosen method of evangelism.

The tall, slightly humpbacked, preacher had long hair and a beard. Early in his ministry, he walked from town to town passing out handbills in the day and preaching that night, usually staying no more than a night or two in a single town.

He referred to himself as "Crazy Dow," and records in his own writings that he was often an object of scorn and abuse in the towns he traveled to. By the early 1800's however, Dow gained a reputation as one of the country's leading evangelists.

He preached to the Georgia General Assembly in the then capital of Louisville and to a gathering of five thousand elsewhere in Georgia. In Jacksonborough, the town's reception was not so inviting.

At that time, Jacksonborough was a rough place known for the hard drinking and fighting of many of its residents. The oft repeated saying from George White's 1849 book Statistics of the State of Georgia was, "The place had formerly a very bad character. It was reported, that in the mornings after drunken frolics and fights, you could see children picking up eyeballs in tea saucers."

Dow's fire and brimstone sermon at the Methodist Church that night was interrupted by a group that had gathered to harass the evangelist. The service was broken up by the group of "rowdies." Undaunted, Dow followed the group that harassed him as they went into a whiskey store. He was covered with the stink of rotten eggs, but unbowed.

Tradition has it that the fiery preacher snatched up an iron tool and broke open a barrel of whiskey, dumping its contents across the floor. The crowd would have seriously injured or killed Dow if fellow Methodist and Mason Seaborn Goodall had not rescued him, taking Dow home for the night.

The crowd was not appeased and a mob gathered at the Goodall home the following day with a supply of eggs and tomatoes. Dow walked out of town under a barrage of fruit and eggs, stopping at the Beaver Dam Creek Bridge.

Thirty years later, all that was left of the town was the Goodall's home and the story of the curse. The Goodall home had fallen into disrepair by the mid-1960s when the Brier Creek Chapter of the Daughters of the American Revolution took possession of the house. The group raised $40,000 and renovated the house. Today the old Goodall home still stands in good repair along an otherwise abandoned dirt road while all other signs of the once bustling town are long gone.

A note to the reader who has this story reproduced here without the benefit of the remainder of the tour in the book. Jacksonborough is indeed gone without a trace save the Goodall home today. It is just off U.S. 301 several miles north of Sylvania, Georgia.