All About The Rear Guard Preachers - Sam Jones

Sam Jones was a drunken ex-lawyer and ex-school teacher who got converted at the age of 24 and, went on to become the greatest Methodist evangelist since the Wesley's, and one of the greatest gospel preachers of all time. 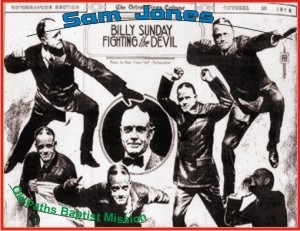 "Sam Jones was a drunken ex-lawyer and ex-school teacher who got converted at the age of 24 and, went on to become the greatest Methodist evangelist since the Wesley's, and one of the greatest gospel preachers of all time.

Samuel Porter Jones was born in 1847 in Oak Bowery, Alabama; his family moved to Cartersville, Georgia, when he was nine. Showing promise as a young man, Jones studied law after graduation and was admitted to the Georgia bar in 1868. However, he began to drink heavily and almost destroyed his career and his marriage. When his father pled with Sam on his deathbed to become a Christian, Jones quit drinking and was converted.

He set out to preach the unsearchable riches of Christ in 1872. And what a preacher he became! God made but one Same Jones; no other American evangelist ever used his methods or language. Troubadour to plain folks, he came out of the South with a vernacular that startled audiences everywhere and shocked them into salvation. He was called "the South's greatest spokesman for God."

No man ever yawned under his preaching. He had a devastating wit and humor, a pet hate in liquor, and an undismayed love for God and man. He blasted the hypocrite mercilessly; he made the sinner -- be he prince, drunkard, or any careless Christian -- see himself as God sees him, and change his ways.

He often turned his homiletic guns on church folk and even on preachers, and they were better Christians for it. Blunt and frank as Billy Sunday, he had the humility of his small town Georgia and the impact of a consecrated cyclone; no town was ever the same once he had passed though.

Will this earth ever hear again the voice or throb of another like him? When Sam Jones died of heart failure on a train at Perry, Arkansas, October 15, 1906, America lost a prince among evangelists."