All About True Salvation - Selling Yourself

"It is a story they tell in the border country, where Massachusetts joins Vermont and New Hampshire." 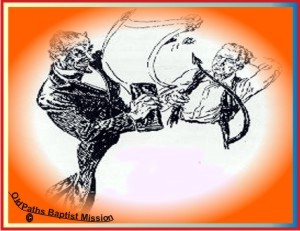 Now we come to a scene ... an imaginary scene, visualized in the mind of Steven Vincent Benet years ago. "It is a story they tell in the border country, where Massachusetts joins Vermont and New Hampshire." 1

It is a good old story for an old New Englander ... like myself. I remember when I was a high school student in Peacham, Vermont, that The Devil And Daniel Webster was required reading in my English Literature class in 1967.

This was a long time before I got saved by the blood of the Son of God, Jesus Christ. Yet, even then, I remember a strange feeling over a certain aspect of Benet's story.

Even though Daniel Webster was an important man early in our history as a nation, it was not him who I primarily remembered all these years. And even though that unsavory character, the Devil himself, known as "the stranger" or "Scratch" in the story ... stuck in my mind, it rather was the eeriness over the plight of another person in the story. It was over Jabez Stone. "There was a man named Jabez Stone, who lived at Cross Corners, New Hampshire."2

There is nothing too peculiar thus far. "He wasn't a bad man to start with, but he was an unlucky man." 3

Now if we believe Benet on this score, that is, concerning what a bad man is, we will begin to believe the silly modernistic liberal's mindset: That there is a little good in all men! You better throw this one out in the trash, and instead,

"As it is written, There is none righteous, no, not one: There is none that understandeth, there is none that seeketh after God. They are all gone out of the way, they are together become unprofitable; there is none that doeth good, no, not one.
Their throat is an open sepulchre; with their tongues they have used deceit; the poison of asps is under their lips: Whose mouth is full of cursing and bitterness: Their feet are swift to shed blood: Destruction and misery are in their ways: And the way of peace have they not known: There is no fear of God before their eyes." [Romans 3:10-18]

There it is ... the double-barrel shotgun has gone off directly in the face of all who would believe in any goodness residing in man's heart. Let's just say that Jabez was not outwardly immoral. That is about where we all start. We come into the world, dead in our sins, and without a spark of goodness inside us.

Now I hear you say, "Oh, my goodness! I am not all that bad." Really! What goodness is that my friend? I am pleading with you to take God at His word. In the story, Jabez Stone, as a young man, begins to promote his lot in life. He goes by all the rules and keeps his nose clean. He does all the normal things! He finds himself a wife and they two have children. He works hard to get ahead, and yet he is always spinning his wheels. It is a series of misfortunes that "dogs" him. Then "one day Jabez gets sick of the whole business."

I mean he was about to call it quits. This is the bump in the road I referred to earlier. It was coming for him! Benet's narration gives it this way. "It was about the last straw for Jabez Stone. 'I vow,' he said, and looked around him kind of desperate---'I vow it's enough to make a man want to sell his soul to the devil! And I would, too, for two cents!' Then he felt a kind of queerness come over him at having said what he'd said; though, naturally, being a New Hampshireman, he wouldn't take it back." 4

Now friend, I know you have seen some person suddenly bump into something in their life, and seen some discernible change in the direction of their life. (The wrong direction!) It can happen any time ... to any one of us. I am inditing in this matter of the heart of man.

How many of the children of men have fallen into the pit of selling themselves to the Devil? It is a common saying among many that every man has a price. In The Devil And Daniel Webster, Jabez Stone had in mind a price for which he was willing to pay in exchange for worldly gain. To gain this world's rewards, he would even be willing to sell his own soul. Poor Jabez! He went after temporal gain to the total neglect of that which is eternal. Like Esau, he was willing to "sell" his own birthright for a mess of pottage! My friend, never...never make the mistake about your soul's worth before God! Your soul is precious to God.

Quotes 1,2,3, 4 from: The Devil And Daniel Webster, Steven Vincent Rene