All About The Rear Guard Preachers - Peter S. Ruckman

Peter S. Ruckman has exposed THE TROJAN HORSE that has been rolled into the Bible colleges and schools. 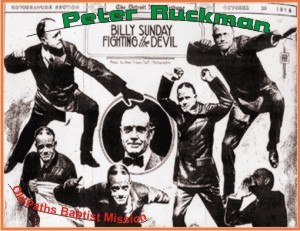 "By all odds Peter S. should have not ever made it to where he is today, but for God’s grace!

I give all praise and thanks to the Lord Jesus Christ for this man who more than any other man in this century, has done more to hold back the apostasy in the local New Testament Baptist churches.

Peter S. Ruckman has exposed THE TROJAN HORSE that has been rolled into the Bible colleges and schools."

"I remember back in 1974 the crisis I had come to as a new born babe in Christ, while aboard the USS Enterprise off the coast of South Vietnam. The crisis was this. Every one of the men in the Bible study in the chapel room on that particular day had a different translation of the Bible. We were all reading in I John 5, when one man quoted I John 5:7. I had a problem! “For there are three that bear record in heaven, the Father, the Word, and the Holy Ghost: and these three are one.” It was not in MY Bible. The A.S.V. (American Standard Version) translators craftily had omitted I John 5:7, and fabricated a new verse seven by splitting verse six in half!

Somebody was lying to me. I was, up to that point in time, ON FIRE for the LORD and witnessing Jesus Christ to every one that would listen to me. But consternation and disillusionment were shooting into me the poisonous venom of unbelief because of the problem of that missing verse in my A.S.V. The question came to me like this. Isn’t the Bible God’s word? Are there errors in it? Which Bible is the word of God? Then the Spirit of God in his care … brought me to the truth in the form of a book by Peter S. Ruckman, Satan’s Masterpiece: The New ASV. From that crisis point in 1974 up to now, I never have doubted that God has an inspired BOOK on this earth for me to read, believe and obey. It is the A.V. 1611 or more commonly known as the King James Bible."

"Peter S. Ruckman came into the world in 1921 in the state of Delaware to a family strongly steeped in the tradition of the military. His great grandfather was an army general in the Civil War. His grandfather was a general in World War I, and his father was a Colonel in World War II. After being raised in Topeka, Kansas, Pete was heading the same way … to an army career. But as God would have it … and by a long hard road … in “the school of hard knocks” … sin was taking its toll in Peter Ruckman’s life. God in his mercy (Yea, in God’s GREAT mercy) sent Hugh Pyle into Peter S. Ruckman’s life. It was at the radio station in Pensacola, Florida, in 1949 where the Gospel of Jesus Christ was heard by faith as clear as a bell in Pete’s heart, and Jesus Christ came into the poor sinner’s heart of a 27-year-old-man."

"Brother Ruckman received his Bible education at Bob Jones University receiving his degrees at the top of his class. Dr. Bob Jones, Sr., was still around in those days, and Peter loved this member of the Old Guard from the early 20th century. Bob Jones, Sr., was of the same stock of evangelists and preachers as J. Frank Norris, Billy Sunday, and Lester Roloff.

These men were not smooth, educated men. They were all rough cut, and they all believed that the A.V. 1611 English Bible was to be preached and was to be taught as the very word of God from cover to cover. Bob Jones, Sr., considered Peter S. Ruckman to be the brightest student to ever graduate from his college and wanted him to stay on staff and TEACH. Brother Ruckman declined, thinking that God wanted him to be an evangelist, not a TEACHER.

So, from that point, many of the hills and ridges of North and South Carolina, Georgia, and Alabama were to be his FIELD. Peter trudged door to door to see the folks where they were and he preached Christ. God honored this and many were saved, BUT God had other plans for Peter S. Ruckman.

In the 1960’s, this evangelist would pastor the Brent Baptist Church in Pensacola, Florida, and start another in the decade to follow, the Bible Baptist Church. But what God really wanted Pete to do was TEACH young men to become Bible-believing pastors, evangelists, missionaries and church workers. In 1964, Brother Ruckman started Pensacola Bible Institute to train men to believe, and preach, and teach the BOOK. The FRUIT is evidence! “Ye shall know them by their fruits”!

The graduates of P.B.I. have gone to the four corners of the earth as pastors, and associate pastors, as missionaries and as evangelists. The proof is in the pudding! The Lord has honored this man of God despite the name-calling brethren. The name-calling that Pete has had to do was not the personal variety, but where some educator, some scholar or some Diotrephes stepped over the line by tearing down the faith in the BOOK of a young man or a young woman, who were brought up to believe in the BOOK as the word of God. Then, in a military-like stance, Brother Ruckman would give them BOTH BARRELS! The LORD Jesus Christ has given Peter S. Ruckman A FULL CUP! "

Back to: Return Back To The Rear Guard Index