All About Old Paths Practice - Jesus Christ Is Born ... September

Jesus Christ was born in the fall, and I believe according to the schedule offered by the FEASTS of the Lord, and in particular to one FEAST, the FEAST of Tabernacles, in the month of September. 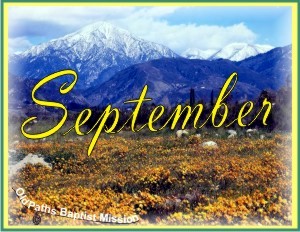 "And it came to pass in those days, that there went out a decree from Caesar Augustus, that all the world should be taxed. (And this taxing was first made when Cyrenius was governor of Syria.)

And all went to be taxed, every one into his own city. And Joseph also went up from Galilee, out of the city of Nazareth, into Judaea, unto the city of David, which is called Bethlehem; (because he was of the house and lineage of David:) To be taxed with Mary his espoused wife, being great with child.

And so it was, that, while they were there, the days were accomplished that she should be delivered. And she brought forth her firsttborn son, and wrapped him in swaddling clothes, and laid him in a manger; because there was no room for them in the inn.

And there were in the same country shepherds abiding in the field, keeping watch over their flock by night. And, lo, the angel of the Lord came upon them, and the glory of the Lord shone round about them: and they were sore afraid.

And the angel said unto them, Fear not: for, behold, I bring you good tidings of great joy, which shall be to all people. For unto you is born this day in the city of David a Saviour, which is Christ the Lord." Luke 2:1-11

The Scriptures Timetable For The Seven Feasts Of The Lord

The Feast Of The Passover

The Feast Of Unleavened Bread

The Feast Of First Fruits

The Feast Of Pentecost

The Feast Of Trumpets

The Feast Of The Day of Atonement

The Feast Of Tabernacles

In Leviticus 23 there is given by God to Israel his plan for the feasts of the LORD (Vs. 2).

The Feasts Of the LORD were to foreshadow things to come in the future. These feasts were to be celebrated according to the Jewish calendar with the first three to be kept in the first month.

The first feast "The Lord's Passover" (Verse 5) was to point to the cross of Calvary, and to the N.T. salvation and the redemption by the blood of The Lamb of God. "Purge out therefore the old leaven, that ye may be a new lump, as ye are unleavened. For even Christ our passover is sacrificed for us:" [1 Corinthians 5:7]

The second feast, "the feast of unleavened bread" follows the next day after the Passover (Verse 6), and is to be associated by type to the N.T. believer's consecrated walk of separation from this world.

The third feast in that same first month, seven days later, is the feast "of the first fruits" of the harvest (Verse 10). According, to 1 Corinthians 15:20, "Christ is risen from the dead, and become the first fruits of them that slept." This feast pictures the conquering of death by the resurrection of Jesus Christ.

The fourth feast comes with a pause in time in the third month. It is the feast of Pentecost, "ye number fifty days" later (Verse 16).

The day of Pentecost is when the Holy Ghost came in Acts 2. The Jew and the Gentile are in "one body", the church. "Even the mystery which hath been hid from ages and from generations, but now is made manifest to his saints: To whom God would make known what is the riches of the glory of this mystery among the Gentiles; which is Christ in you, the hope of glory:" [Colossians 1:26-27]

Now comes a great span of time beginning at the feast of Pentecost in the third month to the seventh month, and the Feast of Trumpets. "Speak unto the children of Israel, saying, In the seventh month, in the first day of the month, shall ye have a Sabbath, a memorial of blowing of trumpets, an holy convocation." (Verse 24)

The blowing of the trumpets signals the end of the time of the Gentiles and the calling of Jews back to the land of Israel. The Church is taken out and the seven years of The Tribulation begin.

Ten days later is "the feast of the day of atonement" (Verse 27) which points to the second coming of Jesus Christ to set up his millennial kingdom on this earth. The last feast in this same month (the seventh month) begins on the "fifteenth day" and goes for eight days. It is "the feast of tabernacles" and Israel is shown to have entered into his rest.

Then When Was Jesus Christ Born?

Jesus Christ was 33 1/2 years old when he was crucified at the third Passover after his ministry began. The Scripture plainly shows us that Jesus had just turned thirty years of age when the Holy Ghost descended in a bodily shape like a dove on him when John baptized him. "And Jesus himself began to be about thirty years of age---." [Luke 3:23] His ministry lasted forty-two months or three and one-half years.

Before the first of the three Passovers, that the Bible records of Jesus' ministry on this earth the following events occurred in that six months. "And the Jews' Passover was at hand, and Jesus went up to Jerusalem," (John 2:13)

The Jew's Passover was in the SPRING of the year, and that is when He was crucified on Mt. Calvary, therefore Jesus Christ's birth occurred 33 1/2 years earlier in the FALL of the year.

God's word gives this witness. "And so it was, that, while they were there, the days were accomplished that she should be delivered. And she brought forth her firstborn son, and wrapped him in swaddling clothes, and laid him in a manger; because there was no room for them in the inn." [Luke 2:6-7]

Jesus Christ was born in the fall, and I believe according to the schedule offered by the FEASTS of the Lord, and in particular to one FEAST, the FEAST of Tabernacles, in the month of September.

"And so it was, that, while they were there, the days were accomplished that she should be delivered. And she brought forth her firstborn son, and wrapped him in swaddling clothes, and laid him in a manger; because there was no room for them in the inn." [Luke 2:6-7]

Jesus Christ was born in the FALL according to the schedule offered by The FEASTS of the LORD, in the month of September during The FEAST of Tabernacles.

Back to: Old Paths Forgotten