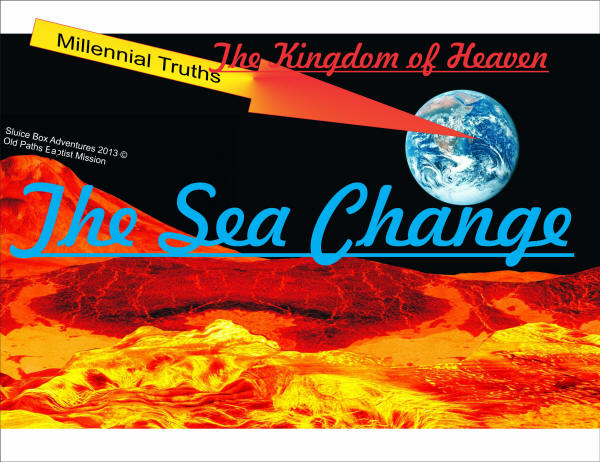 The average run-of-the-mill un-believing Bible commentator will break his own neck every time when dealing with [Ezekiel chapters 40-48] nine whole chapters of God’s Holy Scripture.  An un-believing heart will lead a person to get lost in the woods [in the woods of unbelief].  [This is a sad but true saying.]

What is the antidote to unbelief?  We need to approach the BOOK GOD wrote, which in the English language is the Authorized Version of 1611, or any of its editions, commonly known as the King James Bible, with a believing heart, as the Thessalonians did: “For this cause also thank we God without ceasing, because, when ye received the word of God which ye heard of us, ye received it not as the word of men, but as it is in truth, the word of God, which effectually worketh also in you that believe.” [1 Thessalonians 2:13]

Remember: the BIBLE is 100% of the time very precise [factually, scientifically, mathematically, and historically], and right on-the-money everywhere all the time … in any matter it touches.   The Spirit of God through the prophet Ezekiel uses the precision engineering units of cubits, great cubits, reeds and measures to show the design and the dimensions of this future millennial temple.  [I will attempt the conversions here into the English system of measurement.]

In chapter forty, verse five, and chapter forty-one, verse eight, are located the units of measurement: the “reed”, the “cubit” and “great cubits”.   If the “cubit” is 18 inches, and a “hand breadth” is equal to 3 inches, then a “reed cubit” or “great cubit” is equal to 21 inches.  The “reed” is then 6 times the value of the “reed cubit” which is 21 inches multiplied by 6.   A “reed” in the English system of measurement is 10.5 feet.

Ezekiel 40:5:  “And behold a wall on the outside of the house round about, and in the man's hand a measuring reed of six cubits long by the cubit and an hand breadth: so he measured the breadth of the building, one reed; and the height, one reed.”  Ezekiel 41:8 “I saw also the height of the house round about: the foundations of the side chambers were a full reed of six great cubits.”

Further, the Spirit of God shows this OBLATION is to be divided into three portions:

· From the north end of the OBLATION: a portion for the Levites that measures 50 miles wide east and west, and twenty miles north and south.

· To the south of this portion: a portion for the priests and for the temple, which is centralized in this portion, that is 50 miles wide, and twenty miles north and south.

· To the south of this portion: a PROFANE portion for the city of Jerusalem, which is centralized in this portion.

From under the threshold of the “house” of the temple … a river will flow out of the east side of temple, and thereafter, flows southerly, till it reaches the center of the city of Jerusalem, and then splits to flow east and west.  Now, take in with me this awesome and beautiful scene that is depicted here in Ezekiel chapter forty-seven: “Afterward he brought me again unto the door of the house; and, behold, waters issued out from under the threshold of the house eastward: for the forefront of the house stood toward the east, and the waters came down from under from the right side of the house, at the south side of the altar.  Then brought he me out of the way of the gate northward, and led me about the way without unto the utter gate by the way that looketh eastward; and, behold, there ran out waters on the right side.  And when the man that had the line in his hand went forth eastward, he measured a thousand cubits, and he brought me through the waters; the waters were to the ancles.  Again he measured a thousand, and brought me through the waters; the waters were to the knees. Again he measured a thousand, and brought me through; the waters were to the loins.  Afterward he measured a thousand; and it was a river that I could not pass over: for the waters were risen, waters to swim in, a river that could not be passed over.  And he said unto me, Son of man, hast thou seen this? Then he brought me, and caused me to return to the brink of the river.  Now when I had returned, behold, at the bank of the river were very many trees on the one side and on the other.  Then said he unto me, These waters issue out toward the east country, and go down into the desert, and go into the sea: which being brought forth into the sea, the waters shall be healed.  And it shall come to pass, that every thing that liveth, which moveth, whithersoever the rivers shall come, shall live: and there shall be a very great multitude of fish, because these waters shall come thither: for they shall be healed;  And it shall come to pass, that the fishers shall stand upon it from Engedi even unto Eneglaim; they shall be a place to spread forth nets; their fish shall be according to their kinds, as the fish of the great sea, exceeding many.  But the miry places thereof and the marishes thereof shall not be healed; they shall be given to salt.  And by the river upon the bank thereof, on this side and on that side, shall grow all trees for meat, whose leaf shall not fade, neither shall the fruit thereof be consumed: it shall bring forth new fruit according to his months, because their water for medicine.” [Ezekiel 47:1-12]

I have some questions for you:

· Do you want to be there with LORD?  The LORD will be there!

· Do you want to see this temple?

· Do you want to see this city … Jerusalem … in the millennial reign of Jesus Christ, when Israel will be the “head” of all the nations?

Do you want to see the people of the nations coming to worship the KING, and see “the prince”, the shepherd, the regent king [David] in the top of the mountains? [Micah 4:1]

Ah yes, look with me, and see this promise to us, when we reign with Jesus Christ as kings and priests.  “And hast made us unto our God kings and priests: and we shall reign on the earth.” [Revelation 5:10]

The Temple sacrifice will be restored; this in remembrance of the ONE WHO died on the cross … once for sins.   This sacrifice in the millennium will be different than the sacrifices which occurred before Jesus Christ the perfect Lamb of God came to shed HIS BLOOD on Mt. Calvary.  “Who needeth not daily, as those high priests, to offer up sacrifice, first for his own sins, and then for the people's: for this he did once, when he offered up himself.” [Hebrews 7:27]

It is equivalent to the ordinance of the New Testament churches in the Church Age.  “After the same manner also he took the cup, when he had supped, saying, This cup is the new testament in my blood: this do ye, as oft as ye drink it, in remembrance of me.”  [1 Corinthians 11:25]

It is in remembrance!  Throughout the Church Age, the churches are to remember the atonement that was accomplished by Jesus Christ.  Amen!

It will be in remembrance!  Throughout the Kingdom Age, Israel, and all the nations of the world, will remember the atonement that was accomplished by Jesus Christ.  Amen! Amen!  Amen!

Here are the rules delineated for the TEMPLE in the millennium:

The Temple’s inner court gates will be closed six days and open on the seventh day.

The people will worship at the north or south gate on certain days [“the sabbaths and in the new moons”].

“Likewise the people of the land shall worship at the door of this gate before the Lord in the sabbaths and in the new moons.”

The prince’s entrance is precisely designated.

The flow of the people and of the prince is carefully proscribed.

“It was round about eighteen thousand measures: and the name of the city from that day shall be, the Lord is there.” [Ezekiel 48:35]

14. Then Eternity: The New Heaven and The New Earth]

Everything in their proper order: the 1,000 year Kingdom Age at the end of 1,000 years … will fold into eternity.  Time ends!  This present earth will be dissolved in a “fervent heat”.

Now, we are admonished concerning these things [“the day of God”] in the Second Epistle of Peter: “Seeing then that all these things shall be dissolved, what manner of persons ought ye to be in all holy conversation and godliness, Looking for and hasting unto the coming of the day of God, wherein the heavens being on fire shall be dissolved, and the elements shall melt with fervent heat?” [2 Peter 3:11-12]

After these things; “a new heaven and a new earth” comes and a “holy city” comes down to the “new earth”.  For this we read in the book of Revelation: “And I saw a new heaven and a new earth: for the first heaven and the first earth were passed away; and there was no more sea.  And I John saw the holy city, new Jerusalem, coming down from God out of heaven, prepared as a bride adorned for her husband.” [Revelation 21:1-2]

· The earth has endured the pains of Hell for the last six thousand years.

· The earth has seen the sorrows of death for the last six thousand years.

· The earth has endured the trouble of pollution for the last six thousand years.

· Soon the restitution of all things will occur for a Sabbath of rest.

· The Last Days constitute the DAY of THE LORD.

· A bountiful world will be seen and enjoyed by all creation;

· Under the head nation over all the nations;

· And the throne of David will be restored.

· The nations will worship …

· On the mountain top of Zion’s hill

· In the Temple soon to be built.

· Then eternity will come, with the new heaven, and the new Earth.

“He which testifieth these things saith, Surely I come quickly. Amen.

Even so, come, Lord Jesus.”