For over 170 years the United States Supreme Court always maintained that the phrase: “a wall of separation between Church and State” meant that Congress should not choose any one single Christian denomination in order to make it the “state” denomination.

Church And State: The Walls Of Separation Re-Defined 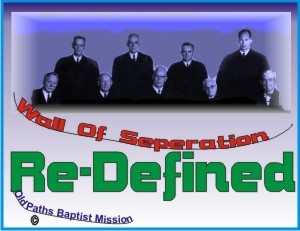 For over 170 years the United States Supreme Court always maintained that the phrase: "a wall of separation between Church and State" meant that Congress should not choose any one single Christian denomination in order to make it the "state" denomination.

Then in the 1960's our Supreme Court redefined this phrase made by Thomas Jefferson ... for the purpose of throwing God and The Bible out of our national institutions ... our schools ... our colleges ... our government.

To usurp God and his moral law can only corrupt us as a people, and in the end destroy our nation.

In January 1, 1802, President Thomas Jefferson replied to concerns of the Danbury Baptist Church in Connecticut by sending them a personal letter with the express purpose to calm their fears that Congress was not in the process of choosing any one single Christian denomination in order to make it the "state" denomination.

All the reference material below is from:
AMERICAN QUOTATIONS Version 1.3 ©1997 by William J. Federer. All rights reserved. Published in the United States of America.

Thomas Jefferson, while serving as the 3rd U.S. President (1801-09), chaired the school board for the District of Columbia. He authored the first plan of education adopted by the city of Washington, which used the Bible and Isaac Watts' Psalms, Hymns and Spiritual Songs, 1707, as the principal textbooks for teaching reading to students.1186

Jefferson, Thomas. 1801-1809, as chairman of the school board for the District of Columbia during his Presidential term, authored a plan of education for the city of Washington which used the Bible and Isaac Watts' Psalms, Hymns and Spiritual Songs, 1707, as the principle textbooks to teach reading to students. John W. Whitehead, The Second American Revolution (Elgin, IL: David C. Cook Publishing Co., 1982), p. 100. Quoting from J.O. Wilson, Public School of Washington (Washington, D.C.: Columbia Historical Society, 1897), Vol. 1, p. 5.

"The Christian Religion, when divested of the rags in which they have enveloped it, and brought to the original purity and simplicity of its benevolent institutor, is a religion of all others most friendly to liberty, science, and the freest expansion of the human mind."1187

The Baptist denomination was one of the sects which had received severe persecution under the state Anglican church in several colonies prior to the Revolutionary War. There was concern that the newly formed Federal Government may choose a national denomination, similar to the Anglican Church in England and Virginia, the Lutheran Church in Germany, the Calvinist Church in Switzerland, or the Catholic Church in Italy and Spain, etc.

The Baptist Association of Danbury, Connecticut, wrote a letter to the newly elected President Thomas Jefferson, expressing their concern. In preparing his reply, Jefferson borrowed phraseology from the Baptist minister, Roger Williams, who founded the Baptist Church in America. Roger Williams had written:

"When they have opened a gap in the hedge or wall of separation between the garden of the church and the wilderness of the world, God hath ever broke down the wall itself, removed the candlestick, and made His garden a wilderness, as it is this day. And that therefore if He will eer please to restore His garden and paradise again, it must of necessity be walled in peculiarly unto Himself from the world..." 1188

On January 1, 1802, President Thomas Jefferson replied to their concerns by sending a personal letter to Nehemiah Dodge, Ephraim Robbins, and Stephen Nelson of the Danbury Baptist Association, Danbury, Connecticut, calming their fears that Congress was not in the process of choosing any one single Christian denomination in order to make it the "state" denomination. He stated:

"The affectionate sentiments of esteem and approbation which you are so good as to express towards me, on behalf of the Danbury Baptists Association, give me the highest satisfaction. My duties dictate a faithful and zealous pursuit of my constituents, and in proportion as they are persuaded of my fidelity to those duties, the discharge of them becomes more and more pleasing. Believing with you that religion is a matter which lies solely between man and his God, that he owes account to none other for faith or his worship, that the legislative powers of government reach actions only, and not opinions, I contemplate with solemn reverence that act of the whole American people which declared that their legislature should "make no law respecting an establishment of religion, or prohibiting the free exercise thereof," thus building a wall of separation between Church and State. Adhering to this expression of the supreme will of the nation in behalf of the rights of conscience, I shall see with sincere satisfaction the progress of those sentiments which tend to restore man to all his natural rights, convinced he has no natural right in opposition to his social duties. I reciprocate your kind prayers for the protection and blessing of the common Father and Creator of man, and tender you for yourselves and your religious association, assurances of my high respect and esteem."1189

Next: The Salient Points In American History