The assertion of the sovereignty and reserved rights of the States, and the strict limitation of those of the Central Government, with the advocacy of a simple and unambitious exercise of its delegated powers, which were inculcated by Mr. Jefferson ... 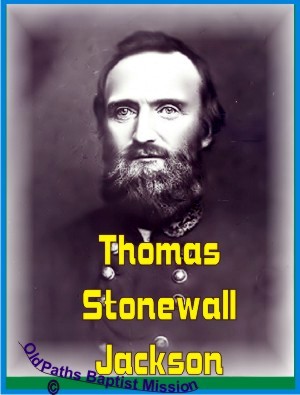 A Pyrrhic victory is so called after the Greek king Pyrrhic, who, after suffering heavy losses in defeating the Romans in 279 B.C., said to those sent to congratulate him,

"Another such victory over the Romans and we are undone."

In another Pyrrhic victory, and in order to preserve the Union of the United States at least 618,000 Americans had to die in the Civil War 1861-65, and some experts say the toll reached 700,000.

These casualties exceed the nation's loss in all its other wars, from the Revolution through Vietnam. [Abraham Lincoln finally realized this cost after the Battle of Gettysburg.]

“The assertion of the sovereignty and reserved rights of the States, and the strict limitation of those of the Central Government, with the advocacy of a simple and unambitious exercise of its delegated powers, which were inculcated by Mr. Jefferson ... ”

Next:  The Battle Of Bull Run: How Jackson Became "Stonewall" Jackson

Next:  The desire by General Stonewall Jackson for chaplains to preach the Gospel of Jesus Christ