Religious liberty has always been a rallying point of real Baptists. They began their colony at Narragansett Bay, which they purchased from the Indians on March 24, 1638 and later moved south to the town of Newport, Rhode Island. Eighteen adult men signed this compact. 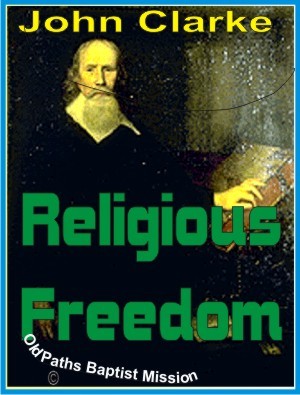 "John was bitterly disappointed as he and his wife Elizabeth stepped off the ship in Boston in Nov. 1637. They had come to find freedom to follow the scriptures. They found the same intolerance they had left. He states that men

'were not able to bear each with other in their different understandings and consciences as in these utmost parts of the world to live peaceable together.'

The authorities in Boston required that all men pay a tax for the support of the state ministers and that anyone excommunicated from the church would then come under civil prosecution.

John was a solution finder, not a complainer. He gathered those being persecuted and proposed that they move and begin a new colony with freedom of religion where men would be accepted without

'being accounted delinquent for doctrine.'

This compact was entered into on Mar. 7, 1638. Backus writes

'He was a principal procurer of Rhode Island for sufferers and exiles.'

Religious liberty has always been a rallying point of real Baptists. They began their colony at Narragansett Bay, which they purchased from the Indians on Mar. 24, 1638 and later moved south to the town of Newport, Rhode Island. 18 adult men signed this compact.

A new colony without a church was of little interest to John. He founded the First Baptist Church in America. It was Clarke that was called in 1638,

'their minister, elder of the church there.'

This church was operated on Baptist principles.

John Clarke is one of the most overlooked men of American history and a scholar by any mans account. He was

'an advanced student of Hebrew and Greek.' 'He was a ripe scholar, learned in the practice of two professions, besides having had large experience in diplomatic and political life...With all his public pursuits, he continued the practice of his original profession as a physician, and also retained the pastoral charge of his church.'

From his writings we find that his doctrines were

'so clear and Scriptural that they might stand as the confession of faith of Baptists today.'

The constables burst into the house demanding that Dr. Clarke cease the sermon! Clarke and the two men with him were placed under arrest. The charge? Being Baptists!!

Baptists had been the focus of persecution in Massachusetts for many years. On Nov. 12, 1644 a law was passed banishing those who 'refused to countenance infant baptism and the use of secular force in religious things.'

On July 19, 1651, Dr. Clarke visited William Witter who lived in Lynn (now in Massachusetts), which was under the jurisdiction of the Boston government. William was an older member of the church at Newport, and had been unable to attend due to sickness. Clarke, Mr. Crandall and Obadiah Holmes had come to visit and encourage him to continue in the Word of God. The day after arriving they were arrested by the constables while holding a private service. They were taken to a Congregational service, doubtless designed to correct the error of their ways. They refused to remove their hats as a protest of this treatment. They were tried for the 'crimes' of holding private services and preaching against infant baptism. On these charges they were convicted without 'either accuser, witness, jury, law of God, or man' and were sentenced to pay a fine or 'to be well whipped.'

The magistrate suggested a public debate on the issue with a leading minister of the state church. Dr. Clarke gladly accepted. The debate was later declined by the state minister. Doubtless he knew he would lose a debate where the Bible would be the standard of judgment. All three men refused to pay the fine and were therefore held for almost one month. In the middle of August some unknown person paid their fine and Mr. Crandall and John Clarke were released. Obadiah Holmes refused to accept the payment and was whipped for his faith. He later became pastor of the church in Newport.

At what price liberty? Rhode Island had been granted a charter for freedom of religion. Now the enemies of Baptists were mad! They began to work at political intrigue to have the charter changed by any false means available. Someone had to defend the colony in England.

Governor Coddington secured a charter in 1649 that gave him the virtual power of a sovereign for life in Rhode Island. John Clarke and Roger Williams were sent to England in 1651 to try to overturn that charter. They were successful. Though that battle was won, the fight continued. The enemies of liberty continued to lie to England. Therefore Dr. Clarke had to stay and guard the safety of the new colony. After the death of Oliver Cromwell, 1660, Charles II came to the throne. Clarke wrote a new charter and persuaded Charles II to seal it on July 8, 1663. Finally, he was able to return to his chosen homeland. Dr. Bicknell said, "The charter of Rhode Island has been recognized as the most liberal state paper ever issued by the English Crown." Its provisions were so well constituted that it stood until 1843 when the present state constitution was adopted.

This statement from the charter is inscribed on the West Facade of the Capitol in Providence;

"THAT IT IS MUCH ON THEIR HEARTS (IF THEY MAY BE PERMITTED) TO HOLD FORTH A LIVELY EXPERIMENT, THAT A MOST FLOURISHING CIVIL STATE MAY STAND AND BEST BE MAINTAINED, AND THAT AMONG OUR ENGLISH SUBJECTS, WITH A FULL LIBERTY IN RELIGIOUS CONCERNMENTS."

Dr. Clarke had started the first Baptist church in America, been persecuted for his faith and practice. He invested his life in the pursuit of liberty for Rhode Island and supported himself while in England. He established a free school that provided for the free education of its students. This was the first free school on the shores of America. He died on April 20, 1676 and his body is buried in a small cemetery in Newport."