The Six Days Of Creation

The Six Days Of Creation 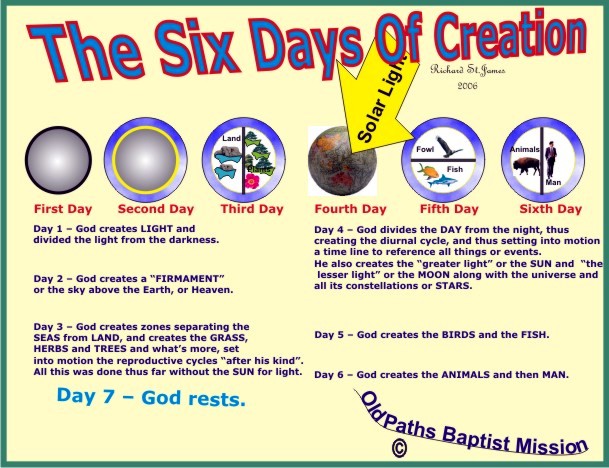 “No man hath seen God at any time; the only begotten Son, which is in the bosom of the Father, he hath declared him.”John 1:1

Genesis 1:1 “In the beginning God created the heaven and the earth.”

Who is this God who “created the heaven and the earth”?  Good question! As our nation increasingly moves away from its Judeo-Christian foundation the ignorance of Bible truths prevails. For several generations now this leavening process with its attendant darkness, known as Pantheism, is supplanting America’s Christian heritage.

Now Pantheism portends a pluralism of gods … many gods … with many ways for man to get to “heaven”. Yet in Genesis 1:26, The True God is revealing himself in the plural. Not as one of many gods but as one Triune God. “And God said, Let us make man in our image, after our likeness”: Note that it says, “our image” … “our likeness”. This is the BIBLE beginning to show to us his triune nature … three persons in one God. The Bible is a progressive revelation.

Hebrews 1:1 “God, who at sundry times and in divers manners spake in time past unto the fathers by the prophets, Hath in these last days spoken unto us by his Son, whom he hath appointed heir of all things”. In the last part of this verse we see WHO the God of creation is. “By whom also he made the worlds”. Verse three, why it is none other than the SON of GOD who is Jesus Christ. “Who being the brightness of his glory, and the express image of his person”.

Do not fail to see this thing. Jesus Christ is the EXPRESS IMAGE of his person (of GOD) “and upholding all things by the word of his power”.

This God of Creation is this “he” in the balance of verse three, “when he had by himself purged our sins, sat down on the right hand of the Majesty on high”. Therefore he is the God of our salvation. The Son of God went to the Cross of Mount Calvary to shed his blood for your sins and mine. In verse eight we see a strange thing.

Here God is speaking to God. What we saw Genesis 1:26 with the phrase “our image” … “our likeness” becomes unmistakable. The Father is very GOD and the SON is very GOD. “But unto the Son he saith, Thy throne, O God, is forever and ever: a sceptre of righteousness is the sceptre of thy kingdom. Thou hast loved righteousness, and hated iniquity; therefore God, even thy God, hath anointed thee with the oil of gladness above thy fellows. And, Thou, Lord, in the beginning hast laid the foundation of the earth; and the heavens are the works of thine hands: They shall perish; but thou remainest; and they all shall wax old as doth a garment; as a vesture shalt thou fold them up, and they shall be changed: but thou art the same, and thy years shall not fail.”

The creation was completed in seven literal days. Genesis 1:2 “And the earth was without form, and void; and darkness was upon the face of the deep. And the Spirit of God moved upon the face of the waters. Genesis 1:3 And God said, Let there be light: and there was light." Genesis 1:4 "And God saw the light, that it was good: and God divided the light from the darkness."  Genesis 1:5 "And God called the light Day, and the darkness he called Night. And the evening and the morning were the first day."

God divides the DAY from the night, thus creating the diurnal cycle, and thus setting into motion a time line to reference all things or events. He also creates the “greater light” or the SUN and “the lesser light” or the MOON along with the universe and all its constellations or STARS.

God creates the BIRDS and the FISH.

God creates the ANIMALS and then MAN. Genesis 1:26 “And God said, Let us make man in our image, after our likeness: and let them have dominion over the fish of the sea, and over the fowl of the air, and over the cattle, and over all the earth, and over every creeping thing that creepeth upon the earth.”  Genesis 1:27  “So God created man in his own image, in the image of God created he him; male and female created he them.” Only man is created “in his own image”. Genesis 1:31 “And God saw every thing that he had made, and, behold, it was very good. And the evening and the morning were the sixth day.”

God rests. In John 1:1 we see the truth again that it is JESUS CHRIST who is the Creator and Savior of mankind! “In the beginning was the Word, and the Word was with God, and the Word was God. The same was in the beginning with God. All things were made by him; and without him was not any thing made that was made." John 1:4 "In him was life; and the life was the light of men. And the light shineth in darkness; and the darkness comprehended it not.” John 1:9 “That was the true Light, which lighteth every man that cometh into the world." John 1:10 "He was in the world, and the world was made by him, and the world knew him not.” John 1:14 “And the Word was made flesh, and dwelt among us, (and we beheld his glory, the glory as of the only begotten of the Father,) full of grace and truth.”

Here is an invitation to you! Receive Jesus Christ as your Savior And LORD! John 1:12 “But as many as received him, to them gave he power to become the sons of God, even to them that believe on his name.”

Will you receive Jesus Christ?  “For there are three that bare record in heaven, the Father, the Word, the Holy Ghost: and these three are one.” 1 John 5:7

Next: The Two Kingdoms