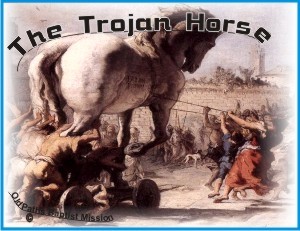 Does anyone remember why Harvard, Yale, and Princeton were founded? They were founded as Bible schools. One peculiar thing needs to be noted. The only mention of the word school in the Bible is in Acts 19:9.

“But when divers were hardened, and believed not, but spake evil of that way before the multitude, he departed from them, and separated the disciples, disputing daily in the school of one Tyrannus.”

“Disputing daily” is the order of business among the conflicting authorities in the Bible schools.

They have no absolute authority!

In my hands I am holding a copy of “Faith For The Family”, September, 1984. On the back of this publication it reads like this:

“Don’t Play Blindman’s bluff with your education. Choose your Christian College with yours eyes open. This institution doesn’t hide the truth from you. It doesn’t fool you with public relations claims, which claims will vanish upon your arrival on campus. If hypocritical Christianity and unfulfilled promises are not for you, Bob Jones University is. We’re for real. Come and see.” “Worlds’ Most Unusual University” “Stands without apology for the “old-time religion” and absolute authority of the Bible.”

I will provide you an illustration of the effect of the underground work by way of a Trojan Horse in a major Christian university’s Bible department in the 1960’s.

The following is quoted from a position paper of this university.

“Position Of The Bible Department Of Bob Jones University On The Scripture” Marshall Neal, Dean, School Of Religion, Stewart Custer, Chairman, Department Of Bible. “Because we believe in the inspiration of the original”

[They are setting us up! Watch it!]

“manuscripts of the Old and New Testament, it is important that we have a Greek Testament that will be as close to the readings of the original as possible. Through the carelessness of scribes who copied manuscripts, many varying readings have crept into them. But God in His providence has preserved for us the original reading through the large number of manuscripts in existence that witness to the text of the New Testament.”

[The original manuscripts are gone. They are saying that no one manuscript is without error, and that therefore, we need the scholars to arbitrate among the many manuscripts to ascertain the proper text].

[This line of reasoning produces two opposing authorities. This will require a higher authority … the SCHOLARS… to determine the correct text.]

“One is the Received Text, edited by a Roman Catholic scholar, Erasmus, in the sixteenth century and based on manuscripts of the late Middle Ages.”

[Note; they are not honest here. Erasmus was only a nominal Roman Catholic, … and Westcott and Hort were both ardently and secretly in heart Roman Catholic.]

“It is often called the Byzantine or the majority text. The other is the Greek Testament, edited by Westcott and Hort in the nineteenth century and based upon manuscripts of the fourth century usually called the Alexandrian text. The King James version was based upon the Received Text; the American Standard Version was based upon the text of Westcott and Hort. We do not believe that either of these texts are “liberal” or “conservative.” Not only Erasmus, but also Westcott and Hort were seeking to present a close copy of the original text. We are interested in which one is closer to the original text of the New Testament.”

[They are clearly stating here for all to see that BJU has no Bible that is the inspired word of God. They say there is no BOOK that God has on this earth that is perfect without error.]

“Because [1] the Alexandrian manuscripts are much older and closer to the time the originals were written, [2] a careful comparison of these manuscripts with those of the Middle Ages has convinced us that a more accurate and careful job of copying was done by the Alexandrian scribes,”

[The Alexandrian manuscripts, and their scribes, are the source of the greatest perversions and corruptions to the extant manuscripts.]

“and [3] Erasmus had to work in haste and with limited resources,”

[He had in fact, access to the same manuscript representatives as Westcott and Hort, but chose to not use them.]

“it is our conviction that these Alexandrian manuscripts, which were not known to Erasmus, are as a rule the more accurate manuscripts to follow.”

[They are the most error filled.]

“Therefore, along with the great majority of conservative scholars, we believe that the text of Westcott and Hort, based upon these Alexandrian manuscripts, is as a whole superior to the text based upon manuscripts of the Middle Ages.”

"[It is, however, the systematic depravitation of the underlying Greek which does so grievously offend me: for this nothing else but a poisoning of the River of Life at its sacred source." The Revision Revised, John Burgon, 1883, page vi]

“The portion of the New Testament which has any substantial variation between the various manuscripts is only about one word in a thousand.”

[Note the word “substantial variation”, this is the talk of a humanist].

“These variations in no way change the teaching of the New Testament on any doctrine.”

[These variations attack the deity of Christ!]

“Therefore, we consider this not an issue of modernism versus conservatism but a matter of individual judgment on the part of fundamental Christians.”

[Someone has rolled a TROJAN HORSE in here. Someone wants to take your faith in the Bible away from you. Some one wants to murder you … and just sap all the spiritual strength out of you!] “Christians should be free to choose and use either of these texts and still work together in harmony to teach and preach the Word of God to those who are without it."

Thus ends the statement of Bob Jones University on the Bible. This is a Trojan Horse!

The huge, hollow, wooden horse was fabricated to have this appearance of being a logical scholarly statement of the position of “Worlds’ Most Unusual University”, that “Stands without apology for the “old-time religion” and “absolute authority of the Bible.” What appears on the outside … is totally different than what is on the inside. A seemingly innocent gift of an education that is built on maximizing uncertainty in what God said is bent on destroying your childlike faith in the old black BOOK and leaving you spiritually “withered.”

This is the undercover action from your enemy ... The Devil himself. It is done by stratagem [or deception], and it works so well in the schools because it plays on the bigness of man’s pride. The Educators will leave behind this Trojan Horse, and they will proceed to just sail away. The student is deceived into believing it was a gift from the scholars, and will roll it into his heart. Little does he know.

For after night fall … and in just a little span of time … from within the TROJAN HORSE, the ENEMIES troops will kill his faith in the BOOK of GOD, and open his mind’s heart to the ENEMY of UNBELIEF. “But with whom was he grieved forty years? was it not with them that had sinned, whose carcases fell in the wilderness? And to whom sware he that they should not enter into his rest, but to them that believed not? So we see that they could not enter in because of unbelief.” [Hebrews 3:17-19] “For unto us was the gospel preached, as well as unto them: but the word preached did not profit them, not being mixed with faith in them that heard it.” [Hebrews 4:2]

The Necessity Of Faith!


“Now faith is the substance of things hoped for, the evidence of things not seen. But without faith it is impossible to please him: for he that cometh to God must believe that he is, and that he is a rewarder of them that diligently seek him.” [Hebrews 11:1,6]

With these declarations from the OLD BLACK BOOK, then it is for us to BELIEVE God at his word. We need to … accept as little children … that God has inspired not only some missing original autographs but that he has MAINTAINED his inspired word down through the centuries of time in spite of sinful men who sit in the high places as the scholars and as the educators. With over 200 translations of Bible having been made since 1881, The Devil sure has caused a lot of confusion, nevertheless, THE BIBLE still remains for us to trust and obey. The Apostle Paul had cause to be thankful over the Thessalonian believers.

“For this cause also thank we God without ceasing, because, when ye received the word of God which ye heard of us, ye received it not as the word of men, but as it is in truth, the word of God, which effectually worketh also in you that believe.” [I Thessalonians 2:13]

THOU STANDEST BY FAITH IN THE WORD OF GOD!

Next: Saving The Gold