America's Hero... saw in his lifetime the "fruit" of the rejection of God's Bible (AV1611) in America. 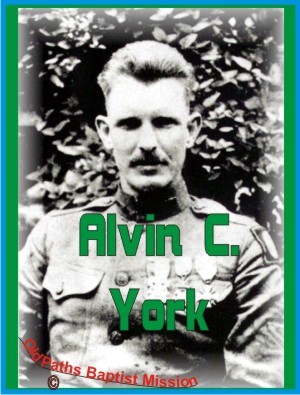 America's Hero... saw in his lifetime the "fruit" of the rejection of God's Bible (AV1611) in America.

In Alvin C. York’s life ... the "fruit" of the rejection of God's Bible (AV1611) in America was brought to the foreground.

Ever since our nations birth, our U. S. Supreme Court had steadfastly maintained the intent of our "founding fathers" as to, and concerning the requirement for our nation to preserve its Christian principles in order for it to perpetuate its existence as a nation.

In 1947, the Supreme Court, in "Everson v. Board of Education," without regard to any precedent, totally pulled out of context Thomas Jefferson's statement in his letter to the Danbury Baptist Church in reference to the "separation of Church and State."

The 1947 decision in essence declared that we were no longer a Christian nation. The stage was now set for further erosion of the country Alvin C. York loved. Two years before Alvin C. York died (1964) another decision was made to sever the land and people from the God he loved.

The Supreme Court, in "Engel v. Vitale," decided (again without citing any prior precedent) to strike out against school prayer (June 25, 1962). (This old soldier had believed in public school prayer). The goal simply was to get God out of our public schools.

On June 17, 1963, in "Abington v. Schempp and Murray v. Curlett," the Supreme Court "outlawed" Bible reading in the public schools (without regard to any historical or legal precedent). Alvin’s heart must have aching with hurt to see our nation divorcing GOD. In this decision, "Bible reading" was considered psychologically damaging.

Downward we were going!

Three years after York died in "Dekalb v. DeSpain” (1967) the decision was to not allow “The Ten Commandments" to be posted in the public schools of our land. Alvin C. York would not live this happen. "The Ten Commandments" were not to be posted on the walls of the public schools in Fentress County of his beloved state of Tennessee ... telling the children not to lie, cheat or steal!

Those "wooly-headed, bleeding-heart, knee-jerking Liberals" saw to that!

And if that was not enough, in 1980, with "Stone v. Graham" the Supreme Court decided that the word of God could not even be mentioned in a public school.

This was a long, long way from our beginnings as a nation. President James Madison once was ascribed to having said that we should "govern ourselves according to the ten commandments of God." The stage was set!

The public school’s that Alvin nourished, helped and fostered in his days of his beloved home land at the three forks of the Wolf River in Tennessee would now be the government schools teaching the following the following curriculum.

1. Walking in the counsel of the ungodly.

2. Standing in the way of sinners.

You might be saying at this point this: "Aren't you just getting a bit too judgmental?" (Now just settle down! Don't be so thin skinned.) Well my friend open your eyes ... be honest with me, our nation has been going downward for years. Remember that Supreme Court decision of 1947? "Because that, when they knew God, they glorified him not as God, neither were thankful; but became vain in their imaginations, and their foolish heart was darkened." [Romans 1:21]

By the time Alvin died in 1964 the humanistic educational program (with God removed) from the public schools was already achieved. No longer would the children of the land that Alvin loved ... be able to see in every facet of their lives the GOD of Heaven and Earth. This is what they would get. Humanism! Humanism! A steady diet of secular humanism would be all that the children of America would receive. But you say, "America’s parents could have prevented this by instilling into their children the word of God." Yes I agree! And no doubt they tried.

Many a parent may well have read the Bible to their children as they were growing up: "My son (daughter), if thou wilt receive my words, and hide my commandments with thee: so that thou incline thine ear unto wisdom, and apply thine heart to understanding: Yea, if thou criest after knowledge, and liftest up thy voice for understanding; if thou seekest her as silver, and searchest for her as for hid treasures; then shalt thou understand the fear of the Lord, and find the knowledge of God." Proverbs 2:1-5

God intends for the children to be raised on the precepts found in Deuteronomy chapter six. Their very education ought be rooted in the Bible. The separation between church and state is a ruse! The "mixed counsel" received by our children in all those years (1940-1970) planted very "the seeds of destruction", for which the FRUIT was to come in the 21st century. Sad but true ... most of our sons and daughters have grown up totally immersed in the ungodly counsel, and have reaped for what was sown. Removing the "Old Black Book" and the God of that Book ... has destroyed our youth for several generations now. Look at the fruit. it is wrong fruit!