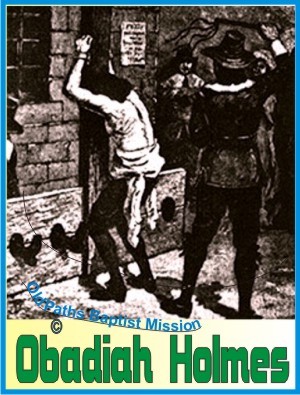 Religious freedom was bought at a tremendous price by the blood of Baptists for those of us in the United States of America.

We need to learn from history!

Obadiah was educated at Oxford University. Upon arriving in America he was admitted to membership in The Church of England in Salem, MA. On Mar 24, 1639, he established a glass foundry, the first in America to make window glass. However, he became a victim of religious persecution, was excommunicated from the church at Salem, and in 1646 moved his family from Salem to Rehoboth, MA. On Oct 2, 1650 Obadiah Holmes and others of Rehoboth, were indicated by the Grand Jury at New Plymouth for holding meetings in their homes on Sunday. This indictment prompted his move from MA to Newport, RI. There he became a colleague of Roger Williams, and the 2nd minister of the first Baptist Church in America.

Rev. Obadiah Holmes, was born at Preston, Lancashire, England, about 1606, and came to this country, as is supposed, about 1639. His religious connections were with the Congregationalists. At first, in Salem, Mass., from which he removed to Rehoboth, where for eleven years more he continued in the church of his early choice. He there became a Baptist, and united with the Baptist church in Newport, R. I. In the month of July, 1651, in company with Dr. John Clarke and Mr. Crandall, he made a visit to William Witter, a Baptist, who resided at Lynn, Mass., about twelve miles from Boston.

The day after their arrival being the Sabbath, they arranged to have a religious service at the house of their host. In the midst of the discourse which Dr. Clarke was preaching two constables presented to him the following warrant:

"By virtue hereof, you are required to go to the house of William Witter, and to search from house to house for certain erroneous persons, being strangers, and them to apprehend, and in safe custody to keep, and to-morrow morning at eight o'clock to bring before me. Robert Bridges." The three "erroneous persons, being strangers," were at once arrested and carried, first to "the ale-house or ordinary," and then forced to attend the meeting of the day. At the close of the meeting they were carried back to the "ordinary."

The next morning they were taken before Mr. Bridges, who made out their mittimus, and sent them to prison at Boston. Having remained a fortnight there, they were brought before the Court of Assistants for trial, which sentenced Dr. Clarke to pay a fine of twenty pounds, Mr. Holmes thirty pounds, and Mr. Crandall five pounds, and in default of payment they were to be publicly whipped. Unknown to Mr. Clarke some one paid his fine, and Mr. Crandall was released on promise that he would appear at the next court. Mr. Holmes was kept in prison until September, when, his fine not having been paid, he was brought out and publicly whipped. Mr. Holmes says,

"As the strokes fell upon me I had such a spiritual manifestation of God's presence as the like thereof I never had nor felt, nor can with fleshly tongue express; and the outward pain was so removed from me that indeed I am not able to declare it to you; it was so easy to me that I could well bear it, yea, and in a manner felt it not, although it was grievous, as the spectators said, the man striking with all his strength (yea, spitting in his hand three times, as many affirmed) with a three-corded whip, giving me there with thirty strokes." — (Backus, i. 94. Newton.) Such was the charity of New England Congregationalists of that day. Gov. Joseph Jenks has left on record the following:

"Mr. Holmes was whipped thirty stripes, and in such an unmerciful manner that in many days, if not some weeks, he could take no rest, but as he lay upon his knees and elbows, not being able to suffer any part of his body to touch the bed whereon he lay."

Mr. Holmes soon after removed to Newport. In 1652 he was ordained to preach the gospel, and took Dr. Clarke's place as pastor of the Baptist church in Newport. He died in 1682. He left eight children, one of whom, Obadiah, was a judge in New Jersey.

He was a Baptist. The Puritans were irritated by the Baptists who refused to baptize babies and added further irritation by insisting on baptism by immersion only. The Baptists were multiplying rapidly and the Massachusetts authorities were alarmed to the point of considering armed suppression of the Baptists in Rhode Island. Obadiah, John Clarke, and John Crandall were arrested by Massachusetts authorities as they visited a sick friend in Lynn. Clarke protested their heavy fines and Governor Endecott replied that Clarke "deserved death" and "was worthy to be hanged." Why? Because they were Baptists - believing in religious freedom, local church authority, and baptism by immersion only. Holmes refused to pay his fine since he was not guilty of any crime whereupon the Rev. John Wilson, pastor of the Boston Church, hit him and asked God to curse him. Holmes was severly whipped (thirty lashes) and carried his scars for life. Holmes said later about the whipping: "...having joyfulness in my heart, and cheerfulness in my countenance...I told the magistrates, 'you have struck me as with roses.1,4' "

He was a glassmaker and weaver.1